In the animal kingdom there are hundreds of different species with some of the most interesting chompers around. From creatures that use their teeth to devour prey to species with filament thin-teeth; here are five of the most ferocious, innovative, and bizarre sets of animal teeth in the world. 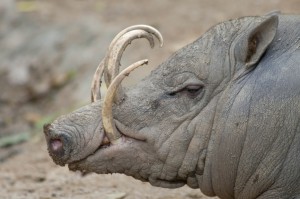 There are four species of Babirusa in the world and they are some of the most bizarre and disturbing creatures.Native to Indonesia Babirusa are known as “Deer Pigs” who have massive lower canines that curl, like fangs, over the upper jaw. Just takie one look at the Babirusa and you will wonder, “How is that even possible?”

This is isn’t Bambi! The saber-toothed deer is a native of Eurasia, and possesses massive fangs that extend several inches below the lower jaw. Also known as Musk deer these fangs are used to during mating disputes among other males.
Narwhal

Sometimes dubbed the “unicorn of the sea” the narwhal was once thought to be a mythical beast by explorers and seafarers alike.  The small 4m-long whale developed a spear on top of it’s head, which can be used in self-defense and to break up ice in the whale’s arctic habitat.
Dromedary Camel

Perhaps the most terrifying herbivore in the world is the Dromedary Camel. While the Dromedary Camel survives on a diet of leaves and grass, the camel has been known to attack owners if they have been provoked. It is well within their power to crush a human skull, as their fatal bites are not unheard of. Yikes!

These creates have a set of “teeth” that are unlike everything else on this list. The “teeth” of a Baleen Whale closely resemble facial hair.These teeth are used a filter in which food is captured.  This way, when the whale open’s its mouth to take in water, krill and other small sea organisms are left behind for the whale to eat.