Over the past few years, a new product has entered the market that is touting itself as a “safer alternative” to cigarettes. Electronic or e-cigarettes are smokeless cigarettes that give the user a nicotine fix but without the tobacco and chemicals contained in the smoke of a traditional cigarette, but are they really safer, and are they completely harmless to your dental health? Here’s a deeper look at what an e-cig does.

Commonly called “vaping,” the use of an e-cig works by converting nicotine into vapor. While they don’t contain tobacco, they derive their nicotine content from the tobacco plant. The nicotine and other flavors are contained in the cartridge that is heated to produce the vapor. The result is no first-hand or second-hand smoke.

Some may feel that this makes e-cigarettes a somewhat more socially acceptable alternative to cigarettes. The state of Arizona banned smoking in public places a few years ago, and while there has yet to be a state law applied to e-cigarettes, Tempe and Gilbert have banned their use in public thus far.

While on the surface, e-cigarettes appear safer, what effect do they have on your teeth and gums? The truth is, they are harmful to your teeth regardless of whether or not there’s smoke. 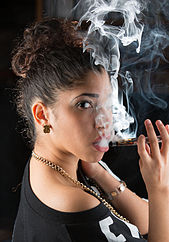 That’s because the nicotine present in e-cigs is a vasoconstrictor. This means that the compounds in it constrict the blood vessels, and the extended decrease of nutrient and oxygen supply to the gum increases the chances of gum disease. Restriction of blood flow also affects the mouth’s natural function of rinsing away bacteria, as well as reduces the body’s innate ability to heal and generate new cells. Since even nonsmokers (and nonvapers) run the risk of tooth decay and gum disease every day, the use of either traditional cigarettes or e-cigarettes make that battle tougher to fight.

While the jury’s still out on whether e-cigarettes are really safer overall than the burning kind, the effects of nicotine in general are well-documented, and it has been confirmed that it presents risks to your oral health.

In 2014, the US Food and Drug Administration (FDA) concluded that “e-cigarettes have not been fully studied, so consumers currently don’t know the potential risks of e-cigarettes when used as intended, how much nicotine or other potentially harmful chemicals are being inhaled during use, or whether there are any benefits associated with using these products.”