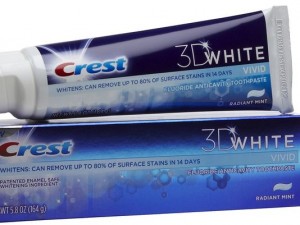 Commonly referred to as scrubbing beads, the blue specked microbeads have been used in multiple products over the past couple of years including exfoliates, chewing gum and astringents.

“Dental professionals will attest that enjoyable toothpastes generally promote longer brushing time and thus healthier outcomes,” Crest said. “We do understand that preferences change, so we have begun removing microbeads from our toothpastes.”

Crest says that their products will be void of microbeads by spring 2016. The problem with microbeads is that they can get trapped beneath the gums promoting the proliferation of bacteria and the further progress gum disease. In short, it’s not the beads themselves that are causing health issues but where they can get trapped without breaking down.

Entering the gums of patients isn’t the only problem that has risen since the use of microbeads has become popular. In early 2014, the Los Angeles Times reported that the Los Angeles River had become inundated with microbeads from facial products and body washes. The small non-biodegradable beads can carry and absorb toxins such as motor oil and insecticides as they enter the river.

It is difficult for the beads to be removed by waste treatment plants as they are so tiny. They can enter the ocean and flow into the food chain. Several companies have ceased the production of these products and Crest is simply following the market trends!