You have probably heard about Xylitol gum, either from your dentist or from news sources like the New York Times, but what is it exactly? We hope to dispel any rumors about the product in this article. Here are the risks and reward of Xylitol and the products it is featured in. 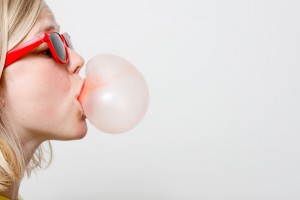 Xylitol is a 5-carbon sugar that can be found naturally in many fruits and vegetables. It is also produced in small amounts within the human body. In recent years Xylitol has been produced in labs and added to products such as chewing gum and throat lozenges.

The xylitol used in commercial products is not the same as the sugar which is produced naturally. It is treated and processed in order to extract the sugar crystals from the fruit or vegetable.

Manufacturers start with source material Xylan which is broken down through a process called acid hydrolyzing. This produces a syrup which is crystallized with ethanol then placed in a centrifuge to separate the Xylitol.

Xylitol is primarily used to kill bacteria but large doses of the product can result in diarrhea. Be sure to limit your Xylitol is limited to below 1.4 ounces per day.

The typical piece of Xylitol gum contains only 1 gram of the sugar, so make sure to only have a stick or two a day.

Research has shown that the cavity fighting power of Xylitol is dubious at best. In an article published in 2006 by the journal of the American Dental Association researchers stated, “Some studies claimed that xylitol-sweetened gum had an anti-carcinogenic effect, though these claims need further study.” Basically, the claims of health food stores are not founded in any legitimate science.

Xylitol might inhibit bacteria growth, but so does white sugar. Xylitol’s dirty little secret is that even in moderate doses of larger than 15 grams, which is approximately 3 teaspoons, xylitol’s own promotional material says it is not safe for everyone to use.