What is gum disease? Are gingivitis and periodontitis the same thing? What do I do now? These are common questions people who are concerned about the state of their oral health.  Although rare in younger people, gum disease is a rampant problem in adults. If you are concerned, you may have been noticing some symptoms of gum disease, some of which include: red and swollen gums, gums which bleed easily, persistent bad breath, pus coming from gums, buildups of plaque around gums, and loose teeth. 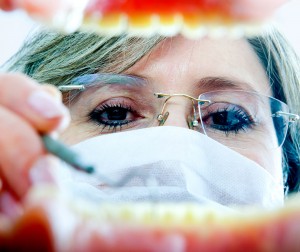 The cause gum disease can be due to a myriad of reasons like not cleaning teeth well, smoking, stress, and poor diet. It can also be hereditary; you can get it if runs in the family, just like other diseases. Or, if you have a weakened immune system due to conditions like diabetes, AIDS, or leukemia it can also occur.

Gingivitis describes the red inflammation of the teeth; while periodontitis is a more advanced gum disease which includes the gum pulling away from the tooth, pain while chewing, sores, or loose teeth. Your treatment will depend on the severity of your problem; those with mild gingivitis may be resolved just by proactive brushing, flossing, and regular cleanings. While those with more advanced gum disease can require a procedure such as tooth scaling, flap surgery, or grafts in very severe cases.

Tooth scaling and root planning involves scraping off tartar above and below your gums, then smoothing out rough spots on each tooth’s root, so bacteria has a harder time adhering.  Flap surgery may be performed by a specialist (periodontist) where the tartar is removed from pockets and formed alongside teeth.  Grafts are only used when bone and tissue have rotted and you need a graft to replace the infected areas. Some may also use guided tissue regeneration which is a technique that allows for bone and tissue to grow by itself.