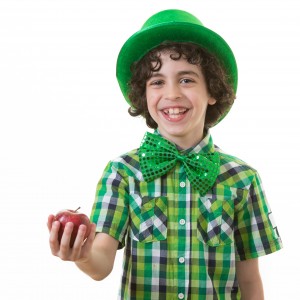 There may not be any Blarney Stones anywhere near the Valley of the Sun, but we still know how to celebrate the Feast of St. Patrick!

The theme for this year’s parade is  “Celebrating 32: 32 Counties and 32 Parades” representing the 32 counties in Ireland and 32 years of the parade here in Phoenix.  It takes place on Saturday, March 14th 2015, and starts at 10am. The march happens on 3rd Street and goes from Sheridan south to McDowell.

After the parade ends, you can catch the free shuttle to the St. Patrick’s Day Irish Family Faire.  The Faire starts at 10 am at Hance Park West side of Central at the Irish Cultural Center at 1106 N Central Ave in downtown Phoenix.

The parade is free; the Irish Family Faire admission is $10 for people ages 13 & over, $8 for seniors 55+ and military, and kids 12 and under are admitted free.  For more information and the map of the parade, go to stpatricksdayphoenix.org

Go green this March 17 with a trip to one of our favorite Phoenix area places to partake in the St. Patty’s Day festivities.

Seamus McCaffrey’s
Next door to downtown’s San Carlos Hotel, Seamus McCaffrey’s has been offering a warm Irish welcome since the early 1990s. Expect a wide range of libations from the Emerald Isle and elsewhere, along with authentic fare ranging from corned beef and cabbage to fish ‘n’ chips to Irish stew.

Rosie McCaffrey’s
Rosie’s has the distinction of being named one of the “Top 10 Irish Pubs in the USA” from MSN, and received numerous awards throughout the years such as “Best Irish Pub” and “Best Fish & Chips” by the AZ Republic and Phoenix New Times.

Don’t forget to stay safe this year and may the luck o’ the Irish be upon ya!