Happy Year of the Ram!  This year, Chuyi, or Chinese New Year’s Day falls on Thursday, February 19th, and if you’re curious about how the Chinese New Year is celebrated across China, your Phoenix area dentist can tell you.  Often, celebrations in China often start much earlier, even up to three weeks before the date.  In general, people start celebrating one week before, on the 23rd of the twelfth month of the Chinese calendar, and the end is on the fifteenth day of the first month, which is commemorated with the Lantern Festival. 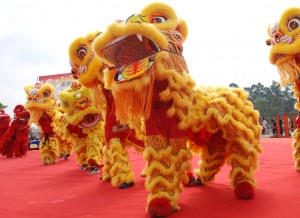 There are several different traditions in the different parts of China, but there are some very common ones, such as:

After giving their home a deep cleaning, celebrators will decorate them to welcome the New Year. Most of the decorations are red in color, and the most popular New Year decorations are upside down fu, dui lian, lanterns, year paint, papercutting, door gods, etc.

Also called Reunion Dinner, this is the most important meal of the year for the Chinese.  Like Christmas here in the United States, this is when family members come home from far away to take part in family traditions, and most families prepare the meals at home instead of going to a restaurant.  The main course is typically fish and in Northern China, dumplings are an important dish.  Both of these dishes signify prosperity.

According to legend, there’s a mythical beast named “Year” who comes out on the night of New Year’s Eve and causes harm and damage to people, animals and properties.  In the legend, it was discovered that “Year” is afraid of the color red, fire and loud sounds.  Therefore, on New Year’s Eve, people will stay awake, launch fireworks and light fires to fend off “Year.”  It is also believed that the person who launches the first firework of the new year will have good luck.

In China, the red packet is called yasui qia, which means “suppressing ghosts money.”  It’s a red envelope with money inside, usually given to children from parents or grandparents, and the Chinese regard red as the symbol of energy, happiness and good luck.  It was also believed that the money in the red packet will suppress the evil from the children, keep them healthy, and give them a long life.