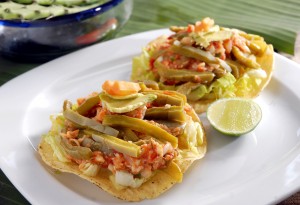 Prickly pear cactus has been a staple of the Mexican and Central American diet for thousands of years. In parts of the U.S. it has been gaining popularity as an exotic, gourmet and healthy addition to one’s diet. They grow wild throughout the American southwest, down to South America and up to Canada. The ones you may find at a local store or farmers market will surely originate from a commercial nopal farm.

Availability, Selection, and Storage
Edible cactus is available year-round with a peak in the mid-spring and the best season from early spring through late fall. When buying edible cactus, choose small, firm, pale green cacti with no wrinkling. Be sure to pick cacti that are not limp or dry. Very small paddles may require more cleaning because their larger proportion of prickers and eyes.  Edible cactus can be refrigerated for more than a week if wrapped tightly in plastic.