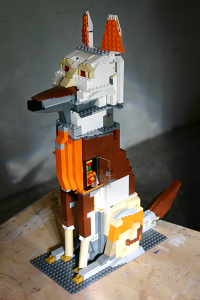 Looking for something to do with the whole family this weekend? Well now through the end of September, the Heard Museum in Downtown Phoenix is hosting a fascinating exhibition called BUILD! which focuses on art created or inspired by the classic children’s toy LEGO.

While the Heard Museum is usually a specifically American-Indian-art based museum, but the newest museum director, James Pepper Henry, “thought it would be fun to change things up for the summer,” according to AZCentral.com.

Another museum administrator, Caesar Chaves, describes the exhibit as “another medium,” and allows children, including American Indian children, to create and relate to LEGOs.

In order to further include American Indian art into the BUILD! exhibition, the Heard Museum commissioned artists Steve Yazzie and Lalo Cota to produce pieces that exude classic Indian color and style.

The Heard Museum is even offering some unique workshop classes surrounding the building of LEGOs and American Indian culture. Parents, you can get some educational time in as well, as the museum will be hosting a series of lectures surrounding the art and creation of LEGO.

BUILD! at the Heard Museum will be running until September 28th. More information below:

BUILD! at the Heard Museum: