Although we’re past the halfway point, we still have plenty of warm weather ahead of us here in Mesa. If you’re still looking for a way to beat the heat and keep the entire family entertained, Golfland/Sunsplash still has time left in the 2015 summer season. Here’s some more info on one of Arizona’s most popular waterparks. 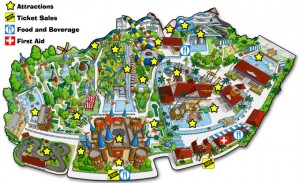 SunSplash Attractions: Since the water park opened in 1986, it has grown to over 29 water-based attractions. It is now one of the most popular water park destinations in Arizona, and was one of the locations in which the waterpark scenes in Bill and Ted’s Excellent Adventure were shot. Here’s some of the favorite attractions:

Double Dare. If you’re seeking a thrill while you’re cooling off, SunSplash has a thrillride or two for you. Among the 29 water rides that SunSplash has to offer, the Double Dare is a 7-story nearly vertical free fall with two parallel racing slides placed side by side.

Thunder Bay. SunSplash’s centerpiece wave pool is over 450,000 gallons of water pushed into huge waves that wash ashore on the sandless beach.

Lazy River. For those risk-averse members of the family, the Lazy River’s a great way to lounge around while you float down an 800 foot river.

On top of the water attractions, Golfland is also home to a huge video arcade with over 200 games, a state-of-the-art laser tag arena, go carts, and of course, miniature golf. While the SunSplash season only runs from May to September, the Golfland attractions are open throughout the year.

For hours, directions and more info on birthday parties, go to golfland.com/mesa, and remember that if you’re out in the sun, make sure everyone wears plenty of sunscreen and drinks plenty of water!