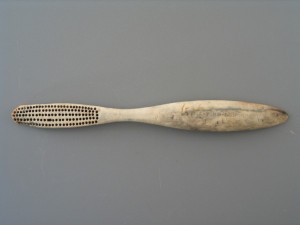 New York City has become an archaeological site, with thousands of artifacts such as an 18th century bone toothbrush with animal hair bristles as well as wine and champagne bottles corked centuries ago.

In addition to the toothbrush a pair of children’s shoes and a copper half-penny are some of the other remnants discovered that reveal the lives of early New York workers in lower Manhattan while digging to install new utilities for the growing residential and business South Street Seaport area.

The toothbrush that was discovered is similar to other primitive toothbrushes. The first toothbrushes appear to be used as in India and Africa as early as 1600 B.C. Various excavations around the world have shown that chew sticks, tree twigs, bird feathers, animal bones, and porcupine quills were used as a form of oral hygiene.

The first bristle tooth brush was discovered during the Tang Dynasty and used hog bristle. There is a long standing rumor that the first bone toothbrush was created in prison by a William Addis who saved a small animal bone left over from a meal to which he added bristles from one of his guard.

Whether this is the true origin or not when Addis was released he started a business that would manufacture toothbrushes he had built and soon became very rich.

The ordinary objects found in NYC paint an intricate picture of the city in the 1700s and 1800s—a community of Dutch and English settlers who hadn’t yet spread north into what is today’s Manhattan. The budding metropolis and it’s water-borne trade was still expanding into the East river.

Archeological discoveries like the one made in NYC show the diverse history of oral hygiene throughout the ages. Technologies may have advanced drastically but there has always been a need to maintain your gum and tooth care.