In a truly miraculous situation, Ian Tibbits, a 43-year-old father, was able to see again after sixteen years from having his vision restored from his teeth!  The father of two used to differentiate his two sons apart by their voices and movements, but he can now see them due to an unusual procedure from an oral surgeon in Britain. 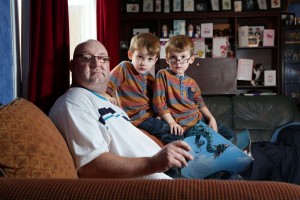 Tibbits was struck in the eye by a piece of metal in 1998 at his job, where he was a forklift operator. His cornea ripped in six places, along with other parts of his face from the accident.  He had also damaged his other eye, a year prior, but then returned to work after it had supposedly healed.

The process, called Osteo-Odonto-Keratoprosthesis (OOKP) is a procedure which replaces the damaged cornea in blind eyes.  The complex surgery was invented in 1963 by Benedetto Strampelli, an Italian ophthalmic surgeon.

The procedure only works if the patient has a functioning retina, and involves reconstructing the eye with a plastic lens,  and a tooth from the patient. The lens is placed inside a hole which is drilled through the tooth and implanted in the eye. Miraculously, the body does not reject the tooth since it is part of the same person!

So for the first time ever, Ian was able to see his two sons and can even watch over them when his wife goes to work.  The couple decided to try this remarkable procedure after nothing else helped him regain his vision, and it ended up giving him 40% of his sight back. OOKP does not always guarantee results, but when it works, the procedure can give sight back immediately to patients.

Isn’t the human body amazing? Remember to take care of your teeth, one day they might be taking care of you!