How much do you really know about your home? Phoenix is seemingly a melting pot of folks from different states who fell in love with the weather and made the move – but how did the city of Phoenix come to be? Here’s a brief little history lesson on the valley of the sun. 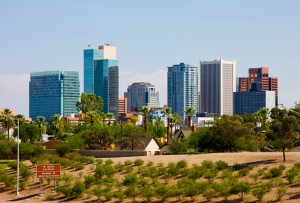 The origin of Phoenix goes back thousands of years, beginning with the early history of the Hohokam people. The Hohokam settled the area we now know as Phoenix, creating many early amenities including canals and central aqueduct. Historians believe the Hohokam people eventually left the area due to severe drought.

Following the Mexican-American War in 1848, Mexico sold much of its northern land to the constantly expanding United States. Phoenix was first a part of the New Mexico Territory until it was later founded in 1867. The region wasn’t officially recognized as a town until the following year.

The city might not have been founded without the keen eye of Jack Swilling, a veteran of the Civil War. Swilling saw potential in the Salt River Valley as a potential farming community. Under his watch, a small community formed and once again inhabited the area. Since the area had been revived from a previous civilization, the name ‘Phoenix’ presented itself as the most appropriate name.

Today Phoenix has a population of over 1,445,632, making it the most populous state capital in all of America. The city ranks sixth overall in terms of population behind major areas including New York, Los Angeles, Chicago, Houston and Philadelphia. Phoenix is constantly growing – the population has been up roughly 4% every year for the last four decades!

There are truly many qualities that make Phoenix such a remarkable place to live, including the addition of your AZ family dentist. See the difference in your smile today!