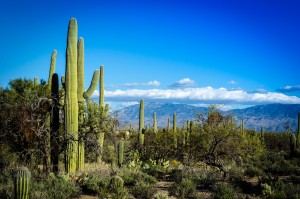 Recently, National Geographic named Phoenix among the top 15 cities in the US for hiking. Thanks to our unique landscape, getting to a challenging hike is often less than an hour’s drive from wherever you are in the valley. Here’s a list of the five most challenging treks around the valley.

The Alta Trail is considered one of the most challenging hiking trails within South Mountain Park, but the steep climb to the ridgeline from either end rewards hikers with a striking view of the desert landscape below. Beginning from the San Juan trailhead hikers should be ready for a few switchbacks and some serious elevation gain, over 1100′, in the first mile or so.

Piestewa Peak Summit Trail
This 2.4 mile trail is considered easy in the lower portions of the trail and becomes much more difficult as the steepness increases in the upper portion. The 2,608-foot Piestewa Peak is not only one of the most prominent landmarks in the Valley; it is also one of the most popular hiking areas.

Echo Canyon Trail (Camelback Mountain)
The trail to the summit begins adjacent to the restroom at Echo Canyon Recreation Area. It’s a fantastic hike that includes some basic rock climbing and a constant incline, so bring plenty of water and basic hiking equipment. This is also one of the most popular trails in the valley, so if you can, find an off-peak time to go.

Cholla Trail (Camelback Mountain)
Cholla Trail is the “other” way up Camelback Mountain, a longer, less-crowded, slightly easier route to the summit. The first mile and a half, though steep in places, is easy enough for the most casual of hikers to enjoy. But the final quarter-mile is rather nasty, requiring a fair amount of scrambling along a bouldery ridgeline to the top. Blue paint swatches and reflectors show the way, although in many places, you have a choice of routes.

Ridgeline Trail (Superstition Wilderness)
The ridgeline is only for fit, experienced hikers willing (and able) to cope with extremely steep, often ill-defined routes across some of the most unforgiving territory in Arizona. Along the way you’ll battle heat, thirst, fatigue, brush, cactus and nagging doubts as to whether you’re on the right course. Although you can hike the route from either direction, the recommended method is to go from Carney Springs to Siphon Draw.